Most mornings I do enjoy the morning walk to work, cutting through a delightful, decently sized park that allows the avoidance of the junkies I would otherwise meet along the way.  And it mostly consists of me talking nonsense about things that are usually bumming around in my noggin while Heid looks on, thinking his own thoughts and hoping that I either make sense at some point or just give him some peace to wake up properly.

Well, Monday past, I was running late.

Heid was having none of this and left, leaving me to rummage around the flat, swearing like a swearer because I couldn't find either my keys or wallet which then ended up being in my bag where I last left them.

Keen to catch up with the “long left ago” Heid, I made like a hip waddling speed walker for the park.  And there he was, a glimpse in the distant horizon.

On this particular morn there had been a storm the previous evening and branches, leaves and sticks were simply just shat all over the park path.  (I should add here, while running/waddling through the park in “intent on catching up” fashion, I did infact REALLY enjoy stomping on branches creating a tiny bone crunching cracking sound, while in my head videos of 80s adventure movies were playing and I was taken to some jungle type scenario where I was running away from a big boulder that’s been set upon me by some baddies)

Before I had a chance to begin a running commentary of said boulder and baddies, I saw before me a corker of a branch layen “a-strew” by the park path.  And despite its pleas of, “LEAVE ME!!  DON’T TOUCH ME, GO AWAY!!! BECAUSE YOU WILL LOOK LIKE A MENTAL IF YOU BEGIN RUNNING THROUGH THE PARK WITH ME IN YOUR HAND”

The plan was instantly formed in what I deemed to be amusing which was catching up with Heid from behind and poking him up the arse with the stick.

There were several flaws to this plan.

1)  Heid had made good distance by this time, meaning I would really have to run far more than I would like in order to catch up.

2) To others enjoying/not enjoying they’re morning park walk, I would just look like a woman running through the park with a big stick.

3)  I wouldn't exactly describe the “stick” as a “big stick” but more like “part of a tree” seeing as it was around 6 foot long with several other branches and leaves still intact.

Still did it though.

Took both hands to hold it and run at the same time which made me move in a slightly unbalanced mental run type way.
Despite this, I was running and laughing at the same time to myself because the image of what I may have looked like was amusing me.  (I will just say at this point, my fella, “The Heid”, was not any closer).

When passing/running/hobbling past a couple of council park workers, although I have the will to run through a park with a 6 foot branch I didn't have the will to meet their gaze, but I did see out from the corner of my eye that the heads did turn and the sight of me laughing to myself and running around with a stick managed to stop their conversation. 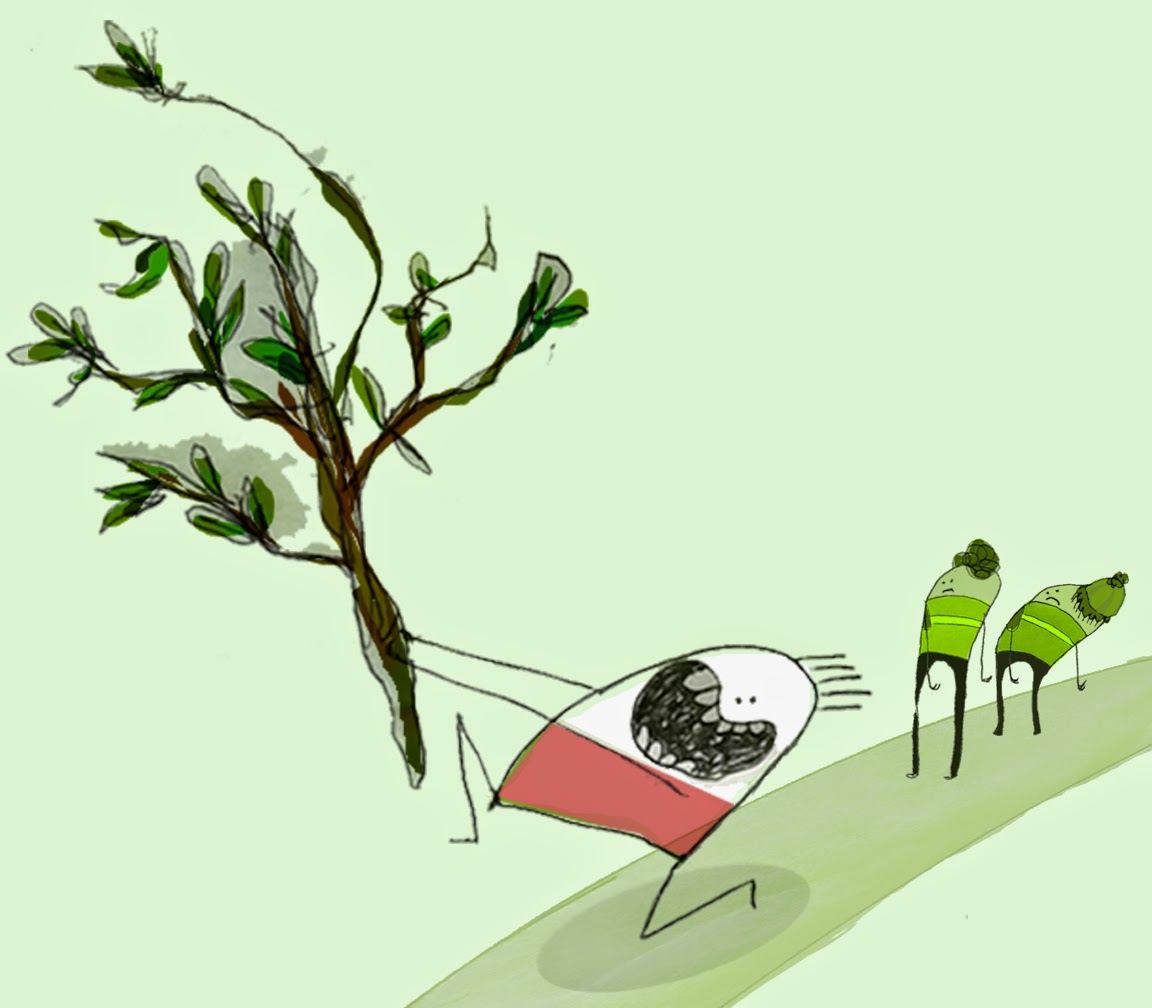 Unfortunately, I blew my own cover, and as the branch tip barely met Heid’s arse, he turned round in time to see me out of breath, bent over, laughing with a 6 foot part of a tree.

Oh well.  Plenty more days ahead to be stupid.
Posted by Unknown at 09:45